Consistent tone. Brilliant acting, beautiful cinematography and a well crafted story with many layers that stays with you for a long time. The theme of the film is embodied in the exquisite performance in an excellent way.

A touching, funny, philosophical and poetical odyssey about time and the chase of memory. Beautifully filmed and edited with a high artistic quality.

The power of the human spirit. Faced with traumas, death and tragedy, it helps to be a fighter…

A touching short documentary in which we get to know the characters in a profound way, despite the brevity. The film deals with a deep societal problem but is made accessible in a light hand, by connecting the theme to home made pizza and the Sound of Music.

A well made animated short film that in a comic way addresses a major important issue.  All seen through the eyes of a child, and with a wonderful final dispute that leaves us with a big smile on our face and a hope for the future.

A strong drama with a difficult and nasty theme. The fine acting of the ensemble works convincingly, and the sparse dialogue shows the tension below the surface that threatens to explode.

MIA RIVERA does a modern day interpretation of American Screwball-comedy.

Her character in the film is a mix of Mae West and a ”Kathy Bates on speed” completely with – not so subtle – innuendos and winks to the audience.

A modern adaptation of Alice in Wonderland with imaginative and stylish and colorful scenography, costume and mask. The production design reflects the theme of the story perfectly and enhances the fantastic elements in the story.

”vampyrs confession”. Through its nervous and raw imagery, we get an insight into what loneliness can lead us to. A well-made and stylish film that in an exciting way uses colors to tell different emotional stages.

Music For Ordinary Life Machines is fascinating and interesting documentary about the emergence of minimal synth in the Greek independent scene from the 80’s and forward. The editing is rhythmical with a good image selection, which oscillates between old concert footage, footage of synths and modern interviews with the musicians. It is an adventurous journey into a world of synth explorers and pioneers who wanted to go into the untested land of synthetic sound.

The sound work is exquisite and evokes memories of the forgotten world of papers in a digitalized world. Without dialogue the sonic and acoustics are raised to a higher level. Every sound is crisp and elevated and works well with the photography and Rembrandtian light

Strong and credible acting by the young actors about a current and frightening topic. The film is a painful representation of how war continues to affect long after it is over. 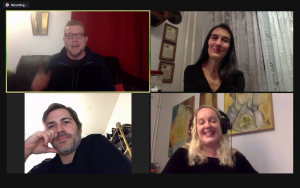